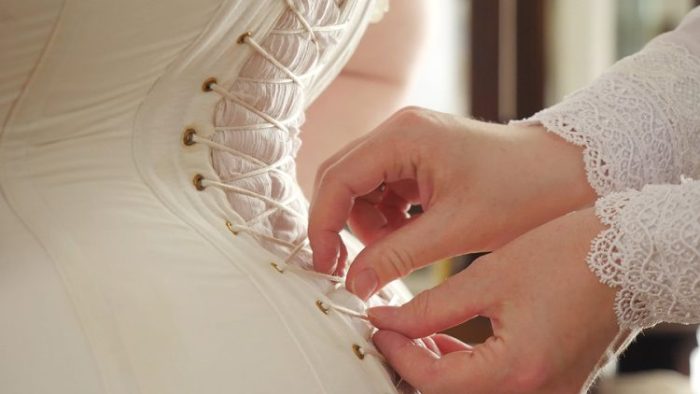 “Come on. Pull it tighter. I’m tough. Make it tight. Pull harder.” I remember my grandmother’s words like it was yesterday. Actually, it was 60+ years ago, and yes in the 1950’s and early 1960’s my grandmother still wore a corset. A trend she borrowed from the Victorian era. She grew up during the waning years of that era when fashion trends began shifting away from the need for these whale-boned and wired items of underwear.  Although miserably uncomfortable for the wearer, Grandma claimed a lady always wears one, at least when she dresses up. Women dressed up much more frequently mid-twentieth-century, but I’m not sure they all still wore corsets. In fact, I am pretty sure most of them did not. Wearing these dohickeys (modern word here) often caused health problems for women. One of the female characters in Tangled Promises finds herself in quite a compromised and embarrassing situation because she laced hers too tightly.

Do you wonder where the idea for this invention originated? I did. A sixteenth-century woman created them because Queen Catherine de’ Medici forbid women with thick waists from attending court. They became a necessity and cinched a woman’s waist to as tiny as 16 inches. A man (Napolean Bonaparte) started a campaign to eliminate them.

Learn more about corsets and their place in fashion history at The Weight She Carries, and at Tim Alderman’s “What Grabbed My Attention Today”. Among the many fun facts you’ll learn, you may be surprised to discoverr men wore them too.

She is clothed with strength and dignity; she can laugh at the days to come.  ~Psalm 31:25 (NIV)

Heidi – My First Christian Fiction Read?
Why a Courting Candle?