By LynnUWatson on June 6, 2022 in Family, Storms of Life, Travel 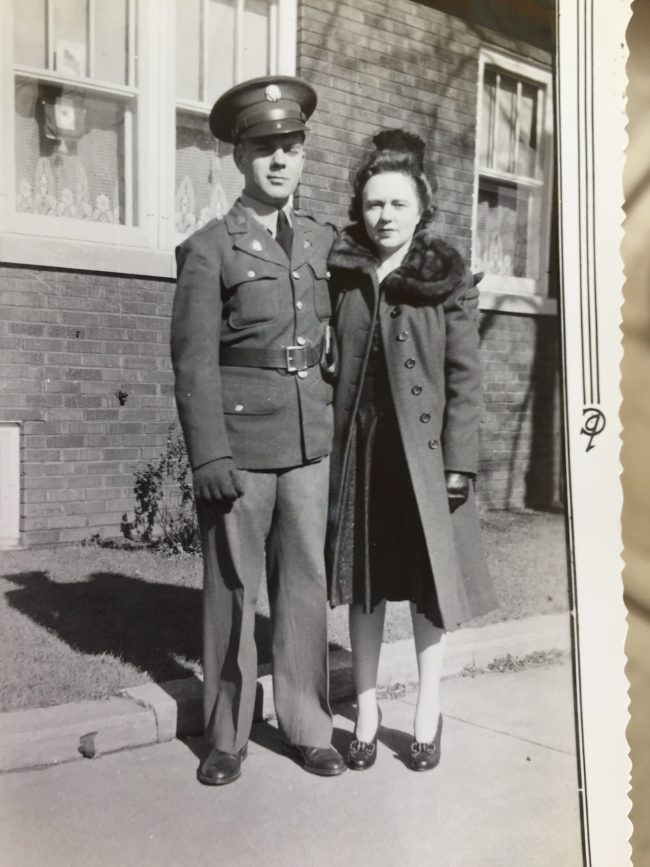 I’m writing this blog post on D-Day, 2022, the 78th anniversary of the U.S. invasion of Normandy. With Father’s Day less than two weeks away, I planned a tribute to dads–mine in particular. Then went down this meandering trail.

In search of family photos with my dad, I pulled this one from my stash. No, that’s not my mother with him, but his sister, Edna.

This is the first time I noticed the star hanging in their Summit, Illinois, home’s window. The stars noted a family member serving in the military. One star for each family member serving. (My other grandparents had three of them hanging in their window, indicating three of their sons serving. Gratefully, all of these were red stars. A gold one meant the serviceman/woman didn’t make it home.)

So, I looked up Dad’s service record, wondering if he may have been on the beach in Normandy that day. I know for some of the war he was stationed in Holland.

What I learned: He enlisted on June 10, 1942, as a private a few months short of his 28th birthday. I found his military I.D. number, but I can’t prove or disprove his involvement at Normandy. I believe by the war’s end he had advanced to the rank of Sargeant. 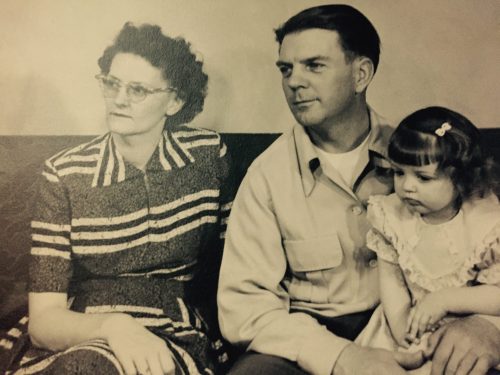 My growing-up years were filled with love, and peppered with storms.

God’s word tells us to honor our father and mother.

Honor your father and your mother, that your days may be long in the land which the Lord your God gives you. ~Exodus 20:12 (RSV)

Several years ago, I processed my backstory into a testimony to be shared in my Sunday School class. Over the years I’d shared tiny bits, but that day I called on the Spirit to lead me to honor my father’s memory in spite of many painful experiences.

Dad–
*Studied the Bible faithfully, and knew God’s word quite well.
*Faithful provider — there was always shelter, clothing, and food.
*Faithful to the marriage bed.
*Believed strongly in being a person of integrity. When I consider the memories of my childhood, I see so many contradictions to this next statement. Nevertheless, he set a high standard for himself and his family.
*Dad was always ready for an adventure. Small ones and big ones alike.

One big adventure I remember. A trip across Route 66 when I was six years old, included a trip to Disneyland. Dad was as excited as his children.

I recently found this YouTube video documenting the early days of Disneyland. This was 1957, the year we visited. That big open mouth on the whale. I remember being so terrified of getting on the boat ride because he might chomp down on me as the boat floated into his mouth. Eventually, the parents convinced me to go, and Dad hung onto me tightly. And the House of the Future! The memories of that family trip resurfaced watching this video and had me searching for us among the visitors.

What family adventures do you recall from your childhood?

Scripture quote from:
Revised Standard Version of the Bible, copyright © 1946, 1952, and 1971 the Division of Christian Education of the National Council of the Churches of Christ in the United States of America. Used by permission. All rights reserved.

His Presence Like the Sun upon My Face
Welcome Liana George & Perfectly Placed!