By LynnUWatson on July 18, 2019 in Historical Events, Inspiration, Today’s Culture 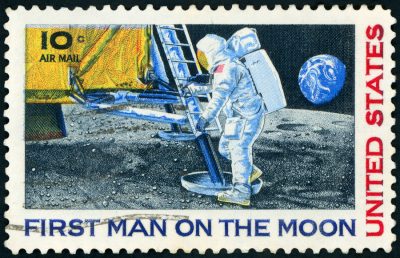 Man walked on the moon! An amazing moment in a time riddled with controversy and contradictions. (And based on the photo here, an airmail stamp was just 10 cents. Do you remember airmail?)

My friends and I graduated from high school a few weeks earlier and faced a world of unrest and anti-establishment rhetoric and actions. Protesters marched against the very unpopular VietNam War, others marched for civil rights, and a hippie culture trusted no one over 30 as they sang out a battle cry of “Peace” and “Make Love, Not War.”

Just a month after Neil Armstrong took those first steps on the lunar surface, a half million young people gathered in New York state for Woodstock. The festival of music, peace, free love and hippies celebrated a radically counter-culture, but equally momentous and memorialized moment in history.

The moon landing sparked new hope in the midst of grossly troubled times. Young and old alike were enthralled by what we witnessed. Ironically for the young, space travel was designed and built by the generation we least trusted.

Also, ironically, most of the hippie generation moved into the capitalistic roles they so despised. They raised the generation born in the 1970s and 1980s that became known as the yuppies. For better or worse and with a wide variety of ideals and values, each generation longs for hope for the future and a better life, however they define it.

But the real hope they desire is not found in space ships landing on the moon. It’s not found in peace and love songs being heralded from a stage in the middle of a rain-drenched farmer’s field. It’s also not found by chasing the latest pie-in-the-sky goal. Real hope is found in a far more stellar moment of history!

On the first day of the week, very early in the morning, the women took the spices they had prepared and went to the tomb. They found the stone rolled away from the tomb, but when they entered, they did not find the body of the Lord Jesus. While they were wondering about this, suddenly two men in clothes that gleamed like lightning stood beside them. In their fright the women bowed down with their faces to the ground, but the men said to them, “Why do you look for the living among the dead? He is not here; He has risen! ~Luke 24:1-6 (NIV)

And this is our ultimate hope for the future, not just in this life, but for our eternal home! A hope beyond this galaxy with its innumerable stars, to the farthest heavens and beyond!

And if the Spirit of him who raised Jesus from the dead is living in you, he who raised Christ from the dead will also give life to your mortal bodies because of his Spirit who lives in you. (Romans 8:11 NIV)

Seraphim Worshipping Shook the Foundation – Earthquakes Could Not Topple It
Spiked Wheels, Darkness, and Our Heavenly Home