By LynnUWatson on May 20, 2021 in God’s Truth, Inspiration, Proverbs 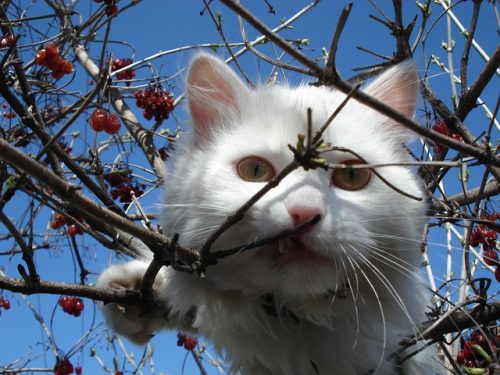 What image does the word tangled bring to mind? Tangled hair? Tangled yarn? A spider’s web? Electrical cords? Or maybe a pack of lies? This kitten is in a tangle of branches. I hope she escapes without too many scratches.

After breaking my novel into three manageable volumes, I’ve nearly completed the first one. I wrote The End, but have tweaked much. Tangled Promises weaves many lies and much deceit through promises made. Some characters work to unravel the snarl while others pull more knots into the pile. If you’ve attempted to untangle a mess of wires, or vines, or knots in a toddler’s hair, you know the challenge.

When lives are at stake, and some insist on the truth of their spoken lies, others are hurt because promises are compromised. God’s word contains many verses about lying and deceitfulness. Some of the characters in Tangled Promises find themselves caught in the consequences of their actions.  Consider these verses:

He who hates, disguises it with his lips,
And lays up deceit within himself;
When he speaks kindly, do not believe him,
For there are seven abominations in his heart;
Though his hatred is covered by deceit,
His wickedness will be revealed before the assembly.

Whoever digs a pit will fall into it,
And he who rolls a stone will have it roll back on him.

Lies come in all sizes and shapes. I pray for a clean heart that speaks from the Love of God living within it. How are your words?  Are the kind ones spoken with sincerity or do they cover the pit you rather avoid?

Many lies and motivations for them are revealed in Tangled Promises. Will those who love well be rewarded?

Let’s Talk Charades
What Do You Know about Pigeons?